Jerusalem artichokes are now fat and ready to harvest in the garden. They can be a pest if they end up in the wrong bed as its almost impossible to get rid of them, they pop up all over our garden.

As a result of this we get more than we really need so in an effort to use the glut and not clutter up the larder we decided to make artichoke powder.

You can buy jerusalem artichoke flour for use in breads and actually as a flavour enhancer for chocolate, which does make sense when you compare the smell of them both.

The process is pretty simple. Wash and scrub the artichokes, slice roughly and fry in a ting rubbing of oil on a medium heat until the tubers are well browned on either side, season whilst cooking.

When completly dessicated blend in a coffee/spice grinder till powdery, check the seasoning and add more salt if required.

Ours looks like this and that jar of powder is the product of about 500g of artichoke, the glut will no longer be a problem

Only a year away 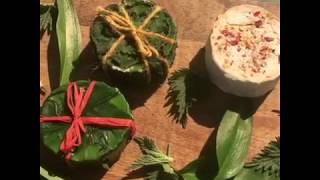 Pigeon and nduja with wild garlic and jerusalem artichoke latkes